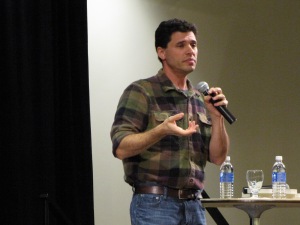 Zombie expert and author Max Brooks stopped on campus Oct. 17 at 7 p.m. to provide tips on surviving a zombie outbreak, with information taken from his writings and experience.

“The first rule of zombie survival: disabuse yourselves of all the myths perpetrated by conventional zombie entertainment — books, comics, TV shows meant to entertain,” Brooks said.

After an introduction by members of the Student Video Productions and Student Life Lecture Board, who both hosted the event, Brooks began the presentation by talking about how his books are classified as “humor.” However, he denied there is anything funny about being attacked by zombies.

“The problem in this country is that we don’t know where the line is between entertainment and reality,” Brooks said. “We blur that line a lot, so much that we start believing that what people do in the fictional world, we’d actually do in real life.”

Brooks discussed various strategies people can utilize in the event of a zombie apocalypse, some being, as he put it, boring but necessary.

“In true zombie survival, it’s not about being entertaining,” Brooks said. “It’s about all those little, tiny boring details you would never see in a zombie movie, but I guarantee you would keep you alive.”

While Brooks said America’s zombie kit would probably consist of cars, guns and light sabers, he spoke about the importance of simple things like hydration, gasoline, transportation and the appropriate weapons. He also discussed the importance of relocation, the fight for survival while respecting nature and working together as a society.

Throughout his presentation, Brooks engaged the audience, getting students involved by asking and answering their questions and addressing concerns. A question and answer session following the presentation gave students an opportunity to receive more advice from the zombie expert, consisting of a variety of topics ranging from dealing with post-zombie economic issues to depending on others in the event of an attack.

His books were sold and signed after the presentation. “Zombie Survival Guide” is a New York Times best-seller and “World War Z” is being made into a movie starring actor Brad Pitt.

“I came to the event because I’m obsessed with zombies,” sophomore Erin Ward said. “I read his books and they were absolutely hilarious. Brooks is a clever guy, the event was definitely worth coming to.”