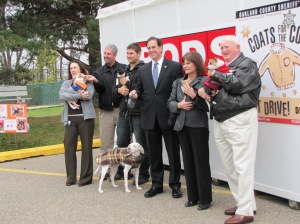 Public officials, puppies and kittens joined together to kick off the 26th annual “Coats for the Cold” winter coat drive Thursday, Nov. 1, at the Oakland County Animal Shelter. The drive and shelter announced their partnership at the kickoff.

“We are really pleased about the partnership,” Larry Obrecht, Animal Shelter division manager said. “We’ve participated in the coat drive and it’s been a great success in the last several years. We hope everyone brings coats to help clothe people and give these pets a home.”

The origin of the drive

When County Sheriff Michael Bouchard was a police officer and councilman 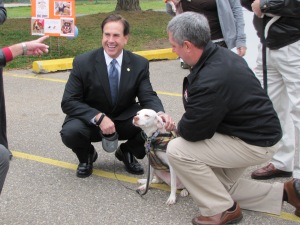 outside of Oakland County, he witnessed people struggling to stay warm by huddling around a steam vent on a cold night. He went home and decided something needed to change.

“I knew everyone probably has two or three nice coats that they don’t always wear,” Bouchard said. “So we started collecting coats – with the rules that those donated had to go to a church or charitable organization, not sold for profit.”

The season of giving

The drive collects gently used coats throughout the month of November, in addition to other winter items including scarves and mittens.

There are 58 drop-off locations around Oakland County.  Last year, the program gathered 3,000 coats, according to Bouchard. PODS (Portable On-Demand Storage) and 800-MINI-STORAGE are sponsors, donating their units for the coat collection.

Collecting at the Animal Shelter has been a successful endeavor, both for gaining donations and helping the animals, which is why they partnered up this year, according to Mike Zehnder, Director of Public Services in Oakland County. County inmates volunteer at the shelter as well, so he said the partnership was a good choice.

In addition to clothing the cold, the drive benefits the homeless pets. In the bad economy, many people cannot afford to take care of their pets and the shelter is becoming increasingly crowded, according to Bouchard.

For every coat donated, $10 is given to be used towards an animal adoption, up to a maximum of $50 to be earned.

Pet Supplies Plus is also involved, donating supplies as the drive continues finding the animals homes by bringing people to shelter, while gathering coats for local residents. The store will also honor pet adoption coupons at their local rescue shelters known as ‘Kitty Cities.’

“The partnership is great,” shelter worker Alexis Shull said. “Nobody should be cold this winter. It helps people stay warm, as well as finding homes for the animals.”