A costume contest gave 471 runners and walkers an opportunity to show off their St. Patrick’s Day style, while the 5K and Green Mile races encouraged physical fitness, according to Thomas Gray, chairman of the Macomb Health and Fitness Foundation.

“(It was) great weather and everything I thought it would be,” Gray said. “Once the runners assembled at the starting line, I think the community felt the power of so many people gathering for this race in their city.”

Tutu skirts, tinsel wigs and green tuxedo shirts were popular among runners. In 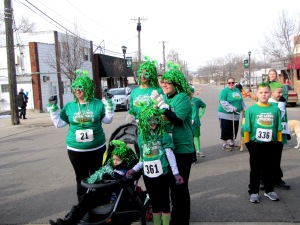 Max Woodford, who ran with his family, won best costume in the child category for his fluorescent green wig and cape. His mother, Danielle Woodford, said they were going for the “family superheroes” look. 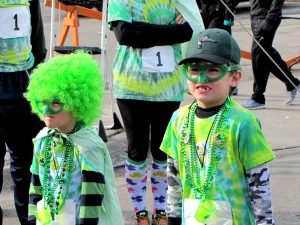 “We thought (the race) would be a fun family activity to kick off spring,” Dan Woodford said. “We started with the green clothing and went from there.”

First place in the 5K went to Danielle Miller of Clinton Township. She said ran for her father, Dale Miller, who has cancer.

Members of the Sterling Heights Chamber participated in the race, and volunteers from Macomb Children’s Hands On Museum and City of Utica Park and Recreation Department helped make the event possible, Gray said.

Runners’ ages widely ranged from Harrison Hensley, 81, who ran the 5K, to Diana Vandoren, 2, who ran the Green Mile with her grandfather Richard Howell.

“I had a good time (running),” said Marilyn Myrna, Harrison Township resident. “This is my third 5k this year and was my best time so far. It was a good course. I’d never been through the graffiti tunnel. It was really fun.”