Stephanie Sokol for The Oakland Press

Clarkston French horn player Caelan Stewart made history this month as a member of the National Youth Orchestra of the United States of America, during its inaugural tour to Russia and England. 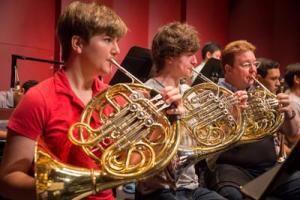 “The highlight was getting to work with the amazing musicians,” said Caelan, 16. “I never played with such an accomplished orchestra before, and felt honored to be able to showcase America’s talent with them.”

Created through Carnegie Hall and the Weill Institute, the orchestra is composed of 120 young musicians from across the country, including three from Michigan. For its first tour, the group traveled to Washington, D.C., Moscow, St. Petersburg and London for five performances, July 11-21.

Violinist Joshua Bell performed with the orchestra, which was directed  by Russian conductor Valery Gergiev of the London Symphony.

Music has been a part of Caelan’s life since age 6, when he started playing piano at the Clarkston Conservatory of Music, where he studied for six years.

In middle school, he began playing French horn. He says he chose the instrument because he liked the sound and knew it would be a challenge to learn. He went on to perform in marching band, solo and ensemble festivals and all-state competitions, and he received first place in the MFMC Competition for brass in January.

After attending Clarkston High School for his freshman and sophomore years, Caelan transferred to Interlochen Arts Academy for his junior and senior years. He will be a senior at Interlochen this fall.

Caelan discovered NYO online, and after preparing audition music, writing an essay and recording a video interview, he waited three months for the verdict.

After learning he had been chosen as one of six horns to tour with the national ensemble, the next step was more practice.

“I believe that Caelan and the other Michigan natives are such wonderful representatives of our state,” said Erika Stewart, Caelan’s mother. “They are students who have worked hard, are incredibly dedicated and passionate, and who are focusing a big part of their lives in such a positive way … sharing their love of music. I think Michigan can be very proud of them.”

Seeing their son play at the Kennedy Center in Washington, D.C., was an amazing experience for her and her husband. They performed very well together after rehearsing as a group for less than two weeks, she says.

“Beyond the fact that he was going to be a part of such an amazing group of young musicians, we were also excited that Caelan was going to get to travel and be a true cultural ambassador,” Erika Stewart said. “Music is truly a universal language and these young people were getting the opportunity to play on some famous stages, in front of audiences in other countries, and share their passion for music with them.”